Abibitumi.com is a global website, app, forum and think tank created by and for Afrikan=Black people.

After predicting millions and millions of deaths for Afrikans via Covid, even before the virus started to fully penetrate and claiming that 70% of all countries should be vaccinated, now Afrika is being neglected.

The cancerous inputs and poison outcomes associated with allowing the descendants of the enslaved to control the colonial system for over half century:

“With ‘mis-educated Negroes’ in control themselves, however, it is doubtful that the system would be very much different from what it is or that it would rapidly undergo change.”
-Carter G. Woodson

“”Mentacide – Deliberate and systematic process culminating in the destruction of the African mind with the ultimate objective the ‘extirpation of African people. End goal of deculturalization, inferiorization, mis-education and racism/white supremacy (Wright 1984)”
-Excerpt from72 Concepts to Liberate the African Mind, edited by Uhuru Hotep and Talibah Baker Hotep”

“”In this untoward situation the Negro finds himself at the close of the third generation from Emancipation. He has been educated in the sense that persons directed a certain way are more easily controlled, or as Ovid remarked, ‘In time the bull is brought to bear the yoke.’ The Negro in this state continues as a child. He is restricted in his sphere to small things, and with these he becomes satisfied. His ambition, does not rise any higher than to plunge into the competition with his fellows for these trifles. At the same time those who have given the race such false ideals are busy in the higher spheres from which Negroes by their mis-education and racial guidance have been disbarred.”
-Carter G. Woodson, The Mis-Education of the Negro”

“â€œ To make a contented slave, you must make a thoughtless one. It is necessary to darken his moral and mental vision, and, as far as possible, to annihilate his power of reason. He â€œmust be able to detect no inconsistencies in slavery. The man that takes his earnings, must be able to convince him that he has a perfect right to do so. It must not depend upon mere force; the slave must know no Higher Law than his master’s will. The whole relationship must not only demonstrate, to his mind, its necessity, but its absolute rightfulness. If there be one crevice through which a single drop can fall, it will certainly rust off the slave’s chain.â€
-Frederick Douglass from his autobiography entitled â€œMy Bondage and My freedomâ€ “

How much did slave owners pay for antebellum-era policies from Aetna, AIG, and New York Life?

BY MICHAEL RALPH AND WILLIAM RANKIN

Recent portrayals of American slavery — from 12 Years a Slave and Django Unchained to Walter Johnson’s River of Dark Dreams and Sven Beckert’s Empire of Cotton — have emphasized the brutal violence on cotton plantations in the years preceding the Civil War. What they miss is that during the same period, slaves that were engaged in other enterprises developed skills that placed them at the heart of industrial capitalism.

Especially after the slave trade was outlawed in 1808, planters found ways to keep human bondage profitable, including smuggling, controlled breeding, and renting slaves to business owners. This last option became especially pervasive in Virginia and the port cities of the Ohio River and Atlantic Coast. A slew of industries — from blacksmithing and carpentry to large-scale railroad construction, coal mining, and steamboat operations — were fortified by the skilled labor of the enslaved.

These men and women became such valuable assets, in fact, that their owners sought to insure them as such. By the 1840s, the number of slaves insured in the South mirrored the number of free whites with life insurance in the North — and both kinds of policies could be issued by the same companies. Slave insurance was one of the earliest forms of industrial risk management, providing an important source of revenue for some of today’s largest multinational insurance companies. It also makes clear that the recent economic crisis, driven by credit default swaps, was not the first time new financial instruments, utilized by AIG and its peers, shaped the lives of U.S. workers. And it won’t be the last.

Steamboat work on the Ohio River and coal mining in Virginia were dangerous jobs and usually involved slaves traveling and living away from their owners. Slaves in coastal cities did not travel as far, but since their specialized skills — whether domestic, artisanal, or industrial — were often procured through short-term contracts, they, too, usually worked without the direct oversight of their owners. 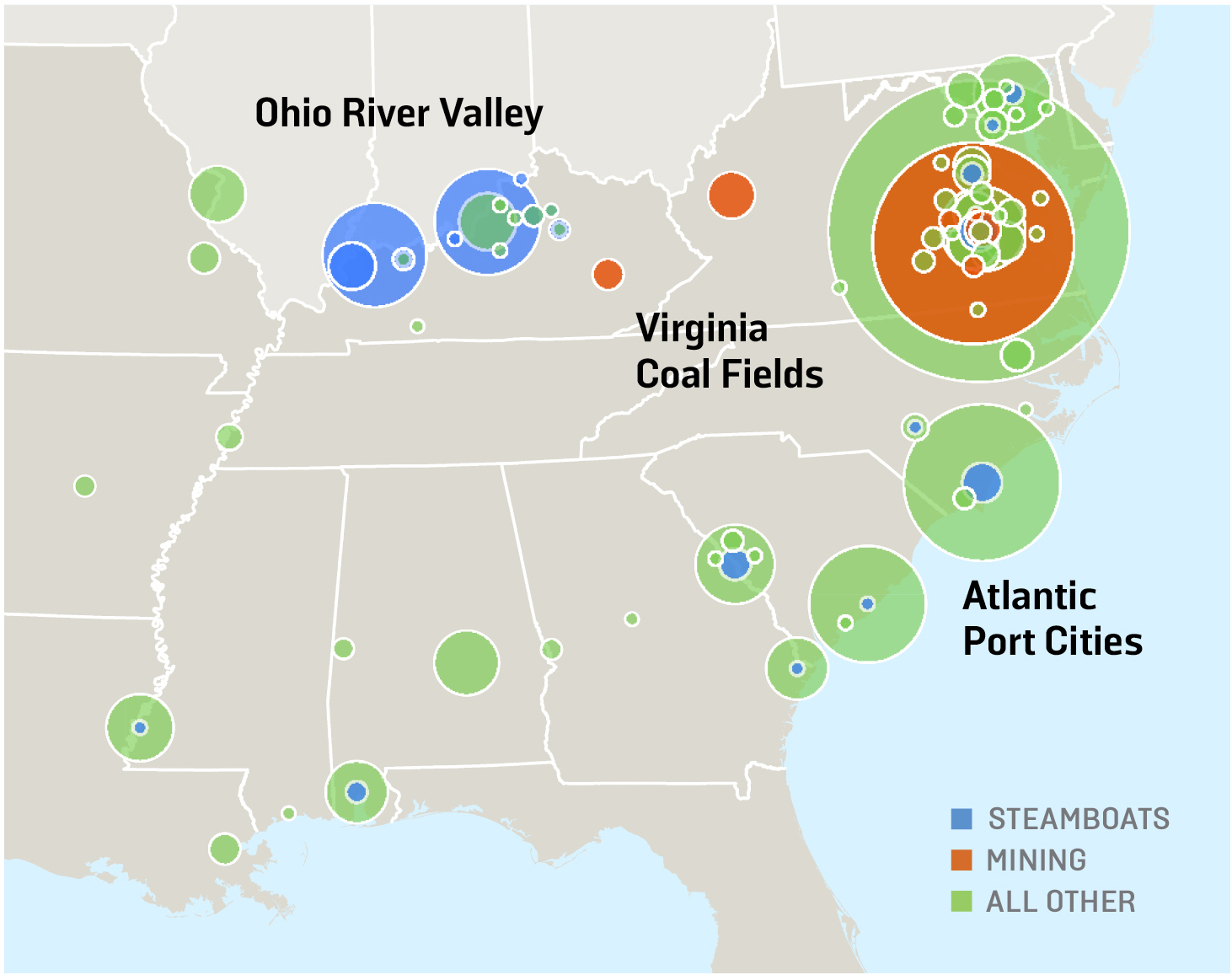 In September 1843, Daniel Zacharias of Frederick, Maryland, insured his slave Robert Randall, 27, a brick-maker, for $200. Randall died near the end of the seven-year policy.

In October 1853, William Easter of Baltimore insured his slave Jane Cole, 21, for $250 to be a servant in the home of John Denning, a local slave dealer. Cole died just two months later. (Denning later moved out of the city to become a planter; in 1860, he owned 10 slaves.)

In January 1855, Thomas Doswell insured seven slaves to work in the coal pits of Kanawha County, in what is now West Virginia. Two older slaves — Nathan and Reuben — were insured for $500 each, and the others — Turner, another slave named Reuben, Richard, Emanuel, and Aaron — were insured for $700. (The average slave price in 1855 was $600.) Doswell owned a large plantation outside Richmond, Virginia; in 1860, he owned 89 slaves.

In January 1855, Richmond merchant Joseph Winston insured his slave Andrew, 11, for $400 to work in a cotton factory across the river in Manchester. The policy was for seven years, but Andrew died that December.

In February 1857, the hiring agency Tompkins & Co. insured 14 slaves — ages 12 through 50 — to work in the Black Heath Coal Pits in Chesterfield County, Virginia, for one year. They were owned by a few different people, including Joseph Tompkins himself, and the value of the policies was over $800 per slave. (In 1857, the average slave price was $636.)

Slave insurance was issued by a wide range of companies in the North and South and sold both to people who owned many slaves and to those who owned just a few. The map here shows about 1,300 antebellum-era policies found in the archives of the world’s largest insurance companies, including Aetna, AIG, and New York Life. The archives are incomplete, and evidence suggests that at least 85 percent of policy records may have been lost over time. Yet the available figures show that the market for slave insurance was mostly urban and especially vibrant in areas where plantation agriculture was in relative decline.

Michael Ralph is an associate professor in the Department of Social and Cultural Analysis at New York University. William Rankin is a historian and cartographer at Yale University.

Source: Heru Djet-Abibitumi.com
“No systematic effort toward change has been possible, for, taught the same economics, history, philosophy, literature and religion which have established the present code of morals, the Negro’s mind has been brought under the control of his oppressor. The problem of holding the Negro down, therefore, is easily solved. When you control a man’s thinking you do not have to worry about his actions. You do not have to tell him not to stand here or go yonder. He will find his “proper place” and will stay in it. You do not need to send him to the back door. He will go without being told. In fact, if there is no back door, he will cut one for his special benefit. His education makes it necessary.”
-Carter G. Woodson, The Mis-Education of the Negro”

Source: Mail & Guardian Africa-October 25, 2020
Stealing Afrika’s Heritage and Pretending to Discover What The Descendants Knew Was Always There

Why are these people in African lives, no one invited them:

Especially the Below Wannabe Pretense of a Savior in African People’s Food and Medicine, Uninvited and Unwanted:
This article is a collaboration between A Growing Culture and the Community Alliance for Global Justice.

Today, we see a lot of prominent people in the Global North pitching solutions to the world’s problems. They claim that their business savvy, resources, and influence are exactly what’s missing in the quest to save humanity from poverty, hunger, and illness. They believe they’ve “earned” their wealth through “hard work” and “determination.” As a result, they sell the idea that they can solve complex social problems.

This is “white saviorism”: the idea that wealthy white people can save “underprivileged,” “under-developed,” “Third World” countries. White saviorism is commonly practiced by misguided individuals who go on volunteer trips for their personal fulfillment. But when white saviors have enough wealth and influence, their “solutions” can change entire political and social systems. At this level, white saviorism becomes neocolonialism.

Powerful Global North governments, corporations, and individuals today don’t need to resort to explicit violence — invasion, seizure, genocide, and enslavement — in order to control other countries. Instead, they can use structural violence — leveraging aid, market access, and philanthropic interventions in order to force lower-income countries to do what they want.

Typically, what they want is more control over markets. The initial interventions end up creating debt for lower-income countries (because they give more power to Global North corporations). That debt ultimately becomes the most deadly form of leverage, giving Global North governments the justification for more interventions and allowing them to shape economic and trade policy in the way they see fit.

So how does Gates fit into all of this? His work through the Bill and Melinda Gates Foundation perpetuates neocolonialism and white saviorism in several ways: through their development narratives, their strategies for intervention, and their funding choices.

The origin of “development” is deeply rooted in colonial relationships and assumptions. In the 1920s, British colonial administrator Lord Frederick Lugard laid out what he termed the “dual mandate” of British imperial rule in Africa: on one hand, to govern with an interest in improving well-being, and on the other hand, to ensure the development of raw materials and their export from Africa to Europe.

The idea of development suggests that communities of Color are impoverished because of some inherent failing, rather than as a result of having their resources pillaged. Development narratives imply that they don’t have the skills, technology, or education to fix things for themselves.

The Gates Foundation mirrors these narratives, especially in its agricultural development funding in Africa. The vast majority of African farmers still use self-sufficient farming methods rooted in indigenous seeds and low-cost approaches to maintaining soil health. According to Gates, this is the problem, not structural poverty. The problem is a lack of access to the “best” technologies — to “improved” seeds, chemical fertilizers, and data services. Through these technologies, Gates claims, farmers will be able to produce more, which will lift them out of poverty (and, as a result, solve hunger).

It’s a laughably misguided claim, considering that we currently produce enough food to feed as many as 1.5x the world’s population. At best, it’s willful ignorance; at worst, it’s a desire to profit by perpetuating the problem.

We can see this narrative play out in Gates’ interventions. His foundation (along with the Rockefeller Foundation and donor governments) created the Alliance for a Green Revolution in Africa (AGRA) to transition farmers from small-scale subsistence farming to industrial farming — from agroecology to agribusiness. To do so, they promote “improved” seeds and chemical fertilizers.

What all these technologies have in common is that they are corporate products, which ultimately turn farmers into new consumers for agribusiness corporations. Instead of extracting raw materials, as under colonialism, agribusiness firms now simply make money by cultivating small-scale farmers’ dependence on their products.

These corporate “solutions” end up driving more poverty. Whereas farmers previously relied on their own locally-adapted seeds and natural fertilizers, they are forced to continuously purchase inputs from agribusiness corporations. The expensive chemicals needed to grow these “improved” seeds deplete the soil. As a result, they have to purchase more and more chemicals over time to compensate for the degradation. This is not development — it’s a vicious cycle that grows corporate profits by trapping farmers in debt.”